So, what you pushing right now?

My first novel, Made for Murder. It’s a noir odyssey that lays a trail of blood and betrayal through a brace of destination cities in the U.S.—Las   Vegas, San Francisco, Miami Beach, and Newport. 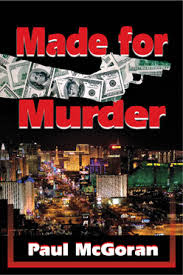 What’s the hook?
I’ve always fancied the mix of highlife and lowlife in crime fiction. The logline for Made for Murder reads: A lethal ex-con romances and marries a San Francisco socialite in a bold bid for power and prestige—but forgets to suppress his killer instinct.
And why’s that floating your boat?
Made for Murder has a considerable history behind it, and getting it published was a long-sought  justification of my writing life. I can’t tell you how many agents and publishers turned it down over the years—thirty of each, probably. I came close with a Canadian publisher shortly after I finished it, but he passed and no one else showed even a flicker of interest. I had used an alternating first person point of view with eight narrators. To me, that was natural for the story, but nobody else saw it my way. When I finally gave in and rewrote it in the third person, New Pulp Press bought it. Lucky for me, the third-person narration worked—and I was able to retain the multiple points of view.
When did you turn to crime?
In November 2005, I participated in NaNoWriMo (National Novel Writing Month). I had always wanted to write some kind of long-form fiction, and grinding out 50K words in a month showed me I could do it. Why crime? Because it’s always relevant and it seemed like fun. Unlike contemporary literary fiction, which strikes me as so much stale horseshit.
Hardboiled or Noir, classic or contemporary?
My heart’s in noir, but hardboiled runs a close second. I try to see stories in cinematic terms, which comes from a lifetime’s immersion in classic film noir. Made for Murder, for example, was a filmscript—until it occurred to me that I had no one to pitch it to and no prospects of going to Hollywood.
George Pelecanos, Ace Atkins and Robert Crais are contemporary favorites of mine. My old school faves are legion, but of the ones still in the game, I’ll single out Lawrence Block and Max Allan Collins.
And, what’s blown you away lately?
A couple of movies and a book—none of them new. In 1997, Donald Westlake wrote The Ax, which I didn’t read until last year. Totally knocked me over with its hook (the most lethal job search in history), and with the idea of noir thriving in the suburbs amidst everyday concerns over real estate values and the children’s school work.
Two film noirs I’m recommending to everybody who’ll listen are The Outfit (1974) with Robert Duvall and Karen Black, and Tomorrow Is Another Day (1951) with Steve Cochran and Ruth Roman. The Outfit is tight and tough, while Tomorrow has a strong emotional component, something like Bonnie and Clyde meets The Grapes of Wrath.
See any books as movies waiting to happen?
Well, The Ax is one, for sure. And I’m hoping Quentin Tarantino gets in touch about Made for Murder. Maybe you could give him a poke.
Mainstream or indie – paper or digital?
I’ve never read an entire novel in digital format. Can’t say I never will, but I like the feel and look of paper and glossy covers, and I like to be able to thumb back a few pages to figure out if Heather is the gal who offed her boyfriend or the one who gives great head.
As far as Indie is concerned, is there a standard definition? Are we talking about writers who self-publish and self-promote? How about a publisher with no bricks-and-mortar presence who assembles a team that puts out ebooks and POD paperbacks on a shoestring? In the latter case, I guess I’m an Indie guy—one who would rather be a mainstream author getting advances and being published in hardcover. Call me envious.
Shout us a website worth visiting.
Hey, I’d love to see more traffic at www.paulmcgoran.com  Comments welcome. Besides that one, I definitely recommend The Big Thrill magazine at www.thebigthrill.org  It’s a monthly vehicle for the International Thriller Writers organization. I’ve contributed a couple of articles there and participated in a few of their roundtable discussions. And for fun, everybody should givewww.filmnoiroftheweek.com a try.
… Finally, tell us any old shit about yourself .
Most important stuff first, my volume of short noir fiction, Paying for Pain (New Pulp Press), was published in December. The theme is the ‘geography of noir,’ and it features murder, blackmail and betrayal in four short stories and a one-hundred-page novella. If that title has a familiar ring, Tony, I’m pretty sure your first novel had an influence on me when I was writing the title story in the collection.
My other big news is that my second novel, The Breastplate of Faith and Love, is under contract and should be out this spring. It continues the story of Made for Murder and introduces a series P. I. named Stafford Boyle. All this ends a long drought for me. I had given up on writing in 2010 and hadn’t written a line until I rewrote Made for Murder in late 2014. Was I blocked? Fuck no. With no expectation of money or recognition, I just gave up. I’m not one of those guys who can write for his own satisfaction.
Right now, I’m about halfway through my third novel, Sooner or Later, Delicate Death. It has  my P. I. going back to his old hometown to solve the murder of the bully who terrorized his childhood.